Travellers face several risks when they travel. Some are small like getting lost in a city or sudden change in the itinerary; others are big like travelling to a dangerous place or getting sick abroad.

There are big outside forces that can affect our mobility. The impact of climate change and the potential final year of the Trump administration will be the two most important causes of travel risks in the year ahead, according to leading travel risk intelligence company Riskline.

Adam Schrader, director of operations, Riskline explains: “Although predicting what will happen in 2020 is a fool’s errand in an increasingly irrational world, a careful examination of ongoing and emerging trends provides crucial information for businesses planning the year ahead. All of the predicted risks we’ve shared are equally important, but two of them in particular will underpin the most dangerous security threats in 2020: the ongoing effects of climate change and the potential final year of the Trump administration.

“In the case of the former, it will be the mostly unseen, long-term effects that are the greater danger, as droughts or floods destroy land and livelihoods and become the catalysts for new violent conflicts and forced migration. Meanwhile the prospect that 2020 could be the final year of the Trump presidency bodes ill for international peace. Both allies and antagonists of the United States may feel that the level of impunity they have enjoyed in foreign affairs since 2016 may be coming to an end.” 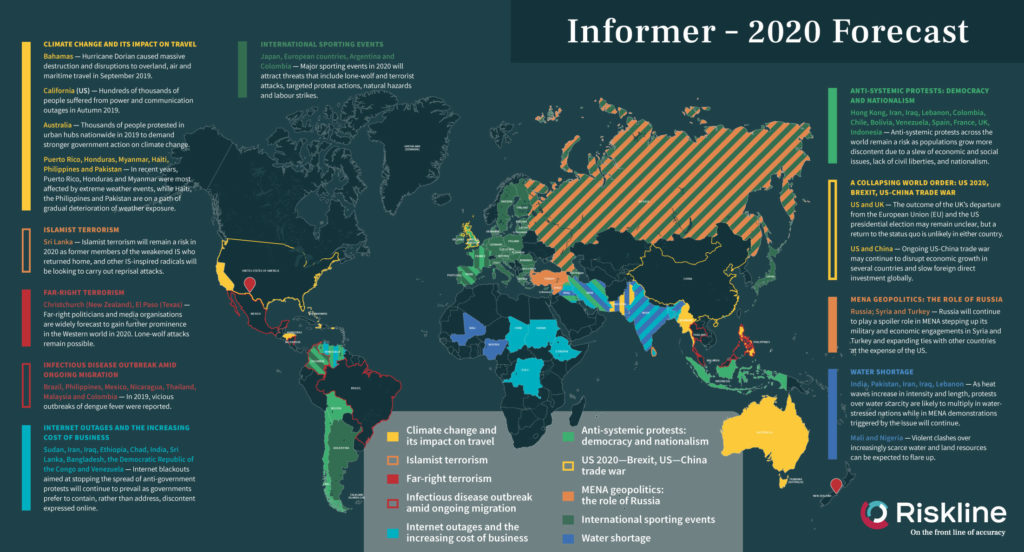 Climate change has led to abnormal patterns of torrential rainfall, devastating floods, severe storms, prolonged heat waves and increased temperatures – all leading to growing water scarcity, droughts and dangerous wildfires. With the increased frequency of these natural disasters – for example, Hurricane Dorian which caused massive destruction across the Bahamas in September 2019 – fatalities, business and travel disruptions and power and communication outages are becoming recurrent. Efforts to reverse the damage caused by climate change are insufficient as the United States, the second-largest carbon emitter, plans to withdraw from the landmark Paris Agreement in 2020 if Trump wins another term in office.

The results of the 2015 Brexit referendum in the UK and the 2016 US presidential election continue to upend long-standing domestic political norms in both countries. The long-term outcome of both events is unclear at present, but a return to the status quo is unlikely in either country – the pro-Brexit and pro-Trump coalitions that won in 2015 and 2016 have mobilised social forces that will remain on the scene for years to come.

When the UK leaves the EU, this will lead to major economic changes in the trading bloc and at the same time, EU members will face further economic disruptions from the US-China trade war fallout as, so far, none of President Trump’s Democratic rivals has promised to remove the tariffs imposed by his administration.

Islamist terrorism will remain a risk for travellers in 2020 as former members of the weakened Islamic State (IS) will be looking to carry out reprisal attacks following the death of former IS leader Abu Bakr al-Baghdadi in a US-led raid in Syria in October 2019. Former IS fighters and IS-inspired individuals will look to carry out lone-wolf attacks in any country with large numbers of foreign visitors.

Far-right politicians and media organisations will gain further prominence in the Western world in 2020, particularly as United States (US) President Donald Trump intensifies his campaigning for the presidential election in November. Attacks similar to the deadly March 2019 shootings at a mosque and an Islamic centre in Christchurch, New Zealand, and the August 2019 mass shooting in El Paso, Texas, remain possible particularly in the US, as right-wing groups gain more appeal and expand their presence in mainstream American politics.

Large and highly mobile populations, increasing urbanisation, weak government responses and deprived healthcare infrastructure, as well as attacks on healthcare workers in conflict zones, coupled with the effects of climate change, are all making outbreaks of diseases like Ebola, cholera, yellow fever and other mosquito-borne diseases more frequent.

In 2019, vicious outbreaks of dengue fever were reported in Brazil, the Philippines, Mexico, Nicaragua, Thailand, Malaysia and Colombia. Scientists predict an 80% chance of an El Niño weather pattern occurring in 2020, bringing disastrous heavy rainfall and long droughts to countries around the Pacific Ocean and paving the way for mosquito-borne diseases.

In 2018 and 2019, internet blackouts aimed at stopping the spread of anti-government protests cost Sudan, Iran, Iraq, Ethiopia, Chad, India, Sri Lanka, Bangladesh, the Democratic Republic of the Congo and Venezuela, billions of dollars in lost economic activity. This tactic will continue to prevail in 2020 as governments prefer to contain, rather than address, discontent expressed online.

In 2019, there was a considerable rise in anti-systemic protests across the world, notably in Latin America, parts of Europe, the Middle East and East Asia. As popular discontent with governments grows in many countries due to economic and social issues, expect these protest movements to grow in volume and frequency in 2020. In addition, nationalist sentiments have also been on the rise across Europe, highlighted by mass protests for independence/self-determination in Catalonia, while the rise of broad anti-corruption fronts has pressured incumbents in places like Serbia, Romania, Hungary and Moldova. Other countries to look out for include the United Kingdom as Brexit looms.

MENA Geopolitics: the role of Russia

Since 2015, Russia has stepped up its military and economic engagements in the Middle East, primarily in Syria and Turkey, but also expanding ties with Israel, Lebanon, Libya, Iraq, Iran, Egypt, the United Arab Emirates and Saudi Arabia, at the expense of the United States (US). Russia will continue to play a spoiler role in the region in 2020.

Major sporting events like the Summer Olympics in Japan, the UEFA Euro, the Copa América in Argentina and Colombia and the three cycling Grand Tours are likely to pose risks to travellers in 2020. Potential risks include targeted terrorism due to large crowds and global media interest. Furthermore, disruptions to air travel across Europe are also possible if any of the tournament should coincide with prolonged labour strikes in the air sector.

As heat waves increase in intensity and duration, protests over water scarcity are likely to multiply in 2020, particularly in water-stressed nations like India and Pakistan, and in Middle Eastern countries like Iran, Iraq and Lebanon. Violent clashes over increasingly scarce water and land resources can be expected in countries like Mali and Nigeria between farmers and herders, while public discontent is likely to extend to pockets of extreme water scarcity in under-developed regions of Italy and Spain as well as the US states of New Mexico and California.