The FAA found that the Chicago-based manufacturer installed equipment on 759 Boeing 737 MAX and NG aircraft containing sensors that were not approved for that equipment; submitted approximately 178 Boeing 737 MAX aircraft for airworthiness certification when the aircraft potentially had nonconforming slat tracks installed; and improperly marked those slat tracks.

“Keeping the flying public safe is our primary responsibility. That is not negotiable, and the FAA will hold Boeing and the aviation industry accountable to keep our skies safe,” said FAA Administrator Steve Dickson.

Boeing will pay the $17 million penalty within 30 days after signing the agreement. If Boeing does not complete certain corrective actions within specific timeframes, the FAA will levy up to $10.1 million in additional penalties. The corrective actions include but are not limited to:

The FAA will continue its oversight of Boeing’s engineering and production activities and is actively implementing oversight provisions from the 2020 Aircraft Certification, Safety, and Accountability Act.

Singaporean Transport Safety Investigation Bureau Investigators noted that the crew had been facing several individual pressures prior to the departure and highlighted that:

Pilots of a Singapore Airlines Boeing 777-300ER inadvertently entered an incorrect waypoint altitude constraint prior to departure, resulting in several alerts from the ground-proximity warning system as the aircraft climbed out of Shanghai Pudong.

The take-off runway assigned had been changed from 34L to 35R which meant the aircraft’s standard departure route switched from HSN 22X to HSN 12X.

This required updating the flight-management computer with the new departure route. The first waypoint on this route, identified as PD062, did not have any speed or altitude crossing constraint which meant the field on the computer’s route display was blank.

Although this was not abnormal, the captain “preferred to have the speed constraint explicitly displayed”, says the Singaporean Transport Safety Investigation Bureau, in its inquiry into the 2 September 2019 incident.

He decided to enter the speed constraint of 250kt, as shown on the departure charts. The 777’s flight-management computer required speed constraints to have a corresponding altitude constraint, so the captain chose to enter ‘500A’ – meaning that the PD062 waypoint should be crossed at 500ft or above.

But the captain inadvertently miskeyed, typing ‘500’ rather than ‘500A’, which neither crew member noticed. This error meant the aircraft’s autopilot would limit the aircraft to 500ft ahead of the waypoint crossing.

“The first officer observed the [captain’s] inputs, as part of the cross-checking process, and accepted the inputs as correct,” the inquiry says, adding that “time pressure” resulted in the first officer’s not carrying out a habitual scan of the entries.

As the aircraft took off from runway 35R, in darkness, the captain called for autopilot engagement at 360ft – an early selection because he wanted to reduce workload, given the need for the crew to spend time converting Chinese metric altitude clearances to feet. 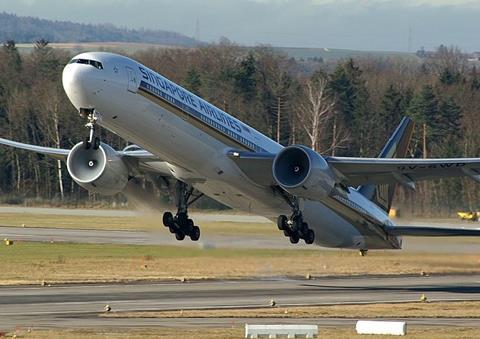 But the autopilot selection meant the aircraft initially climbed to 750ft before descending to 500ft in compliance with the altitude constraint entered for the PD062 waypoint.

The captain “did not realise that the aircraft had stopped climbing”, says the inquiry, and had called for flap retraction believing the 777 had passed 1,000ft. Investigators state that the crew “did not verify” altitude information from the instrument displays.

As the flaps started retracting, the enhanced ground-proximity warning system activated and issued an unexpected ‘don’t sink’ alert, which startled the pilots. The captain nevertheless chose to complete the flap retraction, suggesting to the first officer that the alert might have been due to a pitch reduction resulting from a tailwind.

Nine seconds after the initial alert, the crew received a second ‘don’t sink’ warning, and a third some 9s after that.

“The flight crew then realised that the aircraft had levelled off and they needed to reinitiate a climb,” says the inquiry.

While the captain selected ‘flight level change’ mode in response, he then reverted to ‘vertical navigation’ mode. Flight-data recorder information showed this made no difference to the 777’s altitude, and the aircraft remained at 480-500ft.

Another ‘don’t sink’ caution was triggered, followed shortly afterwards by a ‘pull up’ warning, prompting the captain to disengage the autopilot, pitch the aircraft nose-up and advance the thrust levers.

The aircraft climbed to 1,780ft but, after the captain called for the autopilot to be re-engaged, started descending again towards the 500ft constraint altitude.

At this point the first officer noticed the erroneous constraint entry for the waypoint, and understood the aircraft’s behaviour, informing the captain that the entry needed to be cancelled. Once the entry was deleted, the aircraft was able to climb without further problems and the jet proceeded to Singapore.

“This occurrence is an apt reminder of the guidance given in the flight crew training manual that, when automation does not perform as expected, the flight crew should reduce the level of auto-flight and identify and resolve the condition,” says the inquiry.

“The original level of auto-flight should only be resumed after they have regained proper control of the flight path and performance level.”

Investigators noted that the crew had been facing several individual pressures prior to the departure, including weather concerns, minimum equipment list considerations, and problems downloading route information as a result of a difficult controller-pilot datalink connection.