Robotic falcon takes to the sky above Southampton Airport

Robird, as it is called, is designed to strike fear into the hearts of a wide range of potential runway hazards, including ‘other’ birds of prey. 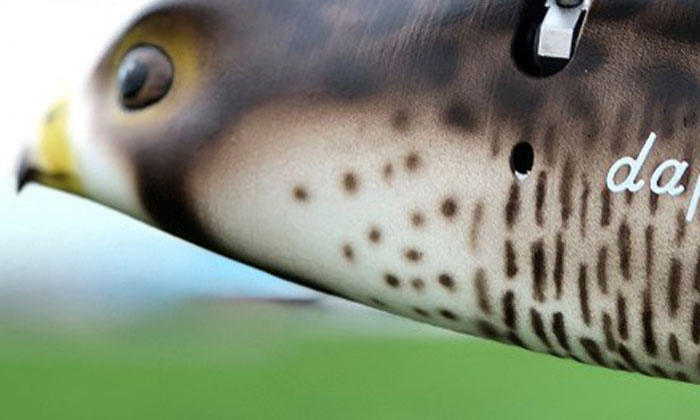 ON PATROL: Robird is the first of its kind to be used on a regular, long-term basis at an airport

Birds of prey are a popular method of keeping the population of pest species down. Hawks have been unleashed on the Houses of Parliament in the United Kingdom to scare of resident pigeons and seaside resorts to manage seagulls. For years, airports have used various species but now, increasingly, they are considering a turn to ornithopters for their needs – and Southampton Airport has become the first in Europe to employ the technology on a long-term basis .

Robird, a drone designed and flown to mimic the actions of a bird of prey, has been trialled patrolling the skies above the Hampshire international airport.

Traditional bird scaring methods lose their impact over time and need to be backed up with lethal deterrents. The benefit of Robird is that all types of birds including corvids (crows), birds of prey, pigeons and gulls see the drone as a predator, and change their behaviour to keep well away. No harm comes to any bird through this method of bird control.

The drone has been trialled at Southampton Airport in partnership with NATS and the developers, Clear Flight Solutions. The successful trial means similar robot bird systems could take flight at other airports in the future.

Dan Townsend, Southampton Airport’s Airside Operations and Safety Manager, said: “At Southampton Airport, we invest every effort to make sure our airfield is as safe as possible. Robird is an innovative idea that we’ve found to be an effective and durable way to reduce bird strikes — so you could say this idea really has wings.”

Ian Rogers, UK & Ireland Director, Clear Flight Solutions, added: “Clear Flight Solutions and Southampton Airport worked together to establish a drone operation on a regular and on-going basis in a CTR for the first time in Europe. The effect of flying Robird at Southampton has been to remove bird hazards safely and controllably from safety critical areas. This will benefit the airport and its customers.”