PHUKET – An Australian tourist fell to his death when the coupling on the chute apparently failed while he was parasailing at Kata beach. 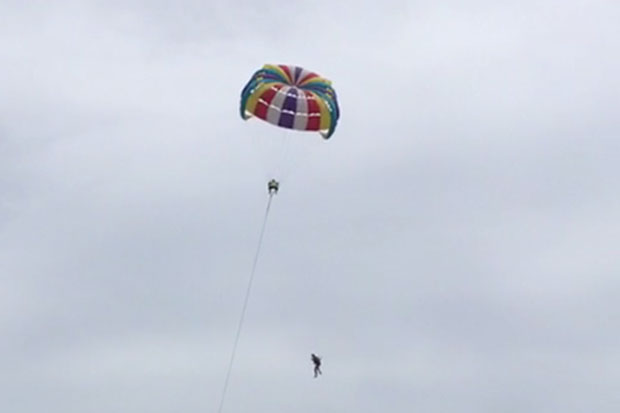 An Australian man falls to his death when the coupling on the chute apparently failed while he was parasailing at Kata beach, Phuket on Wednesday. (Photo grabbed from a clip by his Thai wife Budsabong Thongsangka)

The tragedy occurred around noon in full view of his Thai wife, Budsabong Thongsangka, who was videoing the flight.

Roger John Hussey, 71, rose high into the air and then fell free, tumbling to the sea, shortly after the tow boat took off from the shore.

One of the beach crew was seen being pulled up into the air with him while still adjusting the coupling, and then climbing up into the shrouds, before Hussey fell free.

Volunteers at the beach rushed to bring him to shore. He developed breathing problems and was later pronounced dead, said Pol Lt Suwisit Khirirak, a duty-officer at Karon police station. The accident was not reported to police until about 3pm.

Police pressed charges against boat operator and driver Monthian Jandaeng of reckless driving causing the death of the tourist. Another member of the crew, identified as Runroj Rakcheep, was being interrogated.

The couple had been holidaying in Chiang Mai before visiting Phuket. They were scheduled to return to Australia on Friday.